What can be the Health issues with 5G ? We Should be afraid of it or not ?

What can be the Health issues with 5G Technology ?

5G has been a lot in the news lately. As many of you will know this is a new mode of communication for mobile phones. It has even formed the basis for some conspiracy theories, even connecting with the coronavirus. So, in this video, I will try to explain what 5G is and then you can decide for yourself if you should be afraid of it.

We Should be afraid of it or not ?

Of course I cannot decide for you if you should be afraid, but I can give you all the information. A good place to start to learn about 5G is Wikipedia as for many subjects. So here is the page about 5G and there you can read here in the middle that 5G is actually transmitted by radio waves from one antenna to another. So then of course it remains to be seen what radio waves are: radio waves are electromagnetic radiation. A bit further down the page it says that 5G is actually radio waves with a frequency of 600 to 700 megahertz or even higher up with 2.5 to 3.7 gigahertz, even going up to 40 gigahertz.

So, what do they mean by that?

For that, let’s have a look at electromagnetic radiation and once again for this I also look at Wikipedia. Here on the graph on the right you see that electromagnetic radiation is just a varying magnetic field and electric field. Here you see the red vector going up, which is the electric field and the blue vector going left and right and this is a magnetic field. In fact, this varying magnetic field and electric field form light. What is determining the nature of this light is very much how fast it goes up and down. How fast it goes up and down is determined by the frequency and, this was stated on the previous page, with, let’s say, 500 to 700 megahertz, this is a frequency. It’s expressed in Hertz and Hertz is telling you how much the wave goes up and down within a single second. So, if it’s 500 megahertz, it will go up and down 500 million times per second. So, it’s a very quick variation and that’s why we just see it as steady light because it’s just too quick to see the single variations. 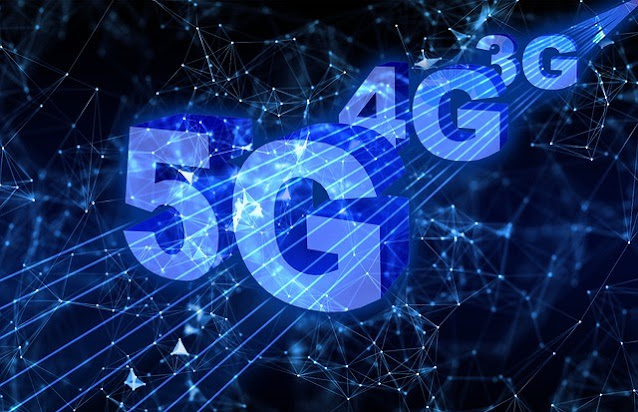 Thinking about normal radio waves, the one you would have in an FM band, there the frequency is 100 megahertz. So that means that it’s going up and down 100 million times per second. Then coming back to 5G, 5G is around 1 gigahertz to 10 gigahertz, meaning that it goes up and down around 10 to 100 times faster than the FM radio waves. Here in this graph you see the effect of a different frequency on electromagnetic radiation. As shown in this wiggly line, you see that on the right there is a very slow up and down motion and so that would correspond to low frequency waves. On the left you have this very quickly going up and down wave which has a high frequency. This is also indicated on this horizontal axis here with a low frequency on the right and high frequency on the left. These FM radio waves that I talked about are around 100 megahertz which is around here and 5G radio waves are around this region in the electromagnetic spectrum.

Check out full informative page on Technology, where you will get a clear idea and updates related to the world of Technology

So it’s clearly indicated what happens with this frequency, as you see in this part of the spectrum, which is enlarged here. You see that the frequency is actually determining the color of the light. The visible light is going from 400 terahertz, light is going up and down 400 trillion times per second. This corresponds to a color of red. But then as the frequency goes up, the frequency goes to 700 terahertz and the color changes to blue. So each frequency is just determining a different color of light and so that’s what it is: 5G is also just a different color of light.
Now you may wonder if light can actually be dangerous. Of course it is! Many of you will have heard of ultraviolet radiation. Ultraviolet radiation is what gets you sunburnt on the beach and also, in the long run, it will cause skin cancer. Even more dangerous are X-rays and gamma rays. They are very energetic radiation causing cancer in your body cells, when they hit it. But then also for lower frequency waves, for instance microwaves, these are also dangerous, but this danger is caused by the resonance between the frequency of the wave and the natural frequency of the water molecules in your body.

visible light is not dangerous and also for 5G no direct danger is known right now. Of course, it is impossible or very hard to test what will happen in the long run, but there’s no reason to assume that they are more dangerous than these radio waves at 100 megahertz for the FM band, because these have been around for more than 50 years or even 100 years.

Well its a thing that you will decide. As I explained 5G is just another color of light, just like the 4G that is operational in mobile phones right now and 3G which has been around for already a long time. Also it’s very similar to what is there in FM radio waves. Even the Sun is emitting light in all these colors: in radio waves, in visible light, in x-rays. So, these radio waves are really everywhere around us. So, if you do decide to be afraid of 5G, then also you should be afraid of these FM radio waves, mobile phones as they are now, and even of the Sun.
0